Genmaicha (pronounced Gen-mai-cha) is a popular type of loose leaf Japanese green tea made from a blend of green tea, combined with roasted brown rice. It is known for having a light yellow hue, fresh grassy flavor and nutty roasted aroma and known as a comforting tea. Invented in 1930 in Kyoto, it is a relatively new tea in Japan.

Genmaicha translates directly to Brown Rice Tea. It is also known as Japanese rice tea and popcorn tea due to the popped rice kernels that can resemble popcorn after the roasting process.

It is referred to as 'the people's tea' due to the comparatively low cost due to the addition of roasted rice. Historically a favourite among poorer Japanese people, it is now drank through all classes of society in Japan and is a favourite green tea in many Japanese households.

How is Genmaicha Produced

Genmaicha is made by mixing Japanese green tea with roasted rice kernels that have been fired in a kiln until they are light brown. The rice grains are soaked, steamed, dried and then roasted. It is traditionally combined with lower grade tea like Bancha or Sencha, but these days can also be mixed with Kabusecha, or even Gyokuro.

Other types include 'Matcha-iri Genmaicha' a combination of matcha powder, green tea and roasted rice, or ground into a powder to make Genmaicha Powder. It is mostly sold as loose leaf tea, but can also be found in tea bags.

Genmaicha is a delicious, comforting and mild tasting tea. Known for its nutty taste, roasted aroma, paired with a fresh, grassy, light green tea flavour. The nutty flavour from the roasted rice offsets some of the astringency from green tea and produces a slightly sweet flavour which allows it to be mixed with lower grades of tea. Some compare the sensation to a warming bowl of rice soup or even porridge.

Due to the mild flavour, lower caffeine content and being gentle and easy to digest, it is especially popular among older Japanese. It is widely known as a comforting and calming tea.

Being a natural source of caffeine and L-theanine, drinking genmaicha green tea can provide a calm source of energy without the spike and crash of coffee. Some people describe this feeling to be more focused and alert over a sustained period.

One cup of freshly brewed genmaicha is calorie free and contains no added sugar. It is often used as a fasting aid in Japan, as the roasted rice flavour can give a sense of fullness similar to a bowl of rice or porridge.

Like matcha and all green teas, Genmaicha contains the antioxidant EGCG which is a polyphenol studied for its health promoting properties. EGCG has also been said to limit free radical damage, which can damage cells in your body. It has even been studied for its ability to reduce inflammation, and potentially lower risk of chronic conditions like heart disease and diabetes.

A cup of Genmaicha has around 10-15mg of caffeine, compared with 30mg for a typical green tea. The lower caffeine content is due to being mixed with roasted rice. When you brew a pot you are brewing part green tea leaves and partly rice, so the overall caffeine content is far lower than typical green tea. Because of this it is great for a refreshing afternoon or early evening drink.

Being a form of green tea it is naturally very low in calories. As you discard the tea leaves after steeping. A serving of genmaicha tea has 0 calories per serve. Like all green tea it also contains many nutrients like Theanine, Catechins, Polyphenols, Vitamin C, Vitamin B, Folic Acid and Chlorophyll.

When do Japanese people drink Genmaicha? Add 5g tea leaves to a teapot or Kyusu.

Steep for 60-90 seconds and pour into a teacup. (If preparing multiple cups, fill cup by cup so you don't get all the flavour in one cup)

You can reuse and brew two more times.

Add 5g tea to a flask or tea jug

Allow to steep for 3 hours

Whisk until combined into a paste.

Both are traditionally lower grade and cheaper teas than Gyokuro or Matcha. Hojicha is made from roasted bancha green tea, but it's not mixed with roasted rice. While Genmaicha green tea is not roasted, only the rice is roasted. They are both brewed in a teapot with.

Sencha, made only from the tea leaf (camelia synensis) is often used to make Genmaicha, but is not mixed with roasted rice itself.

Where to buy in Australia?

Genmaicha is available online or from Asian groceries, Japanese groceries and some supermarkets. Typically what is found in stores is lower quality as it is aged and usually from a lower quality tea.

Loving my Matcha Tea set! Delivery was so fast as well! Thank you

Matcha has been a part of my everyday! And now that it is getting warmer it is perfect with ice! 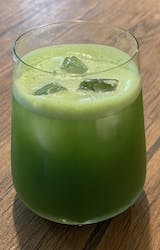 Really enjoyable matcha.
Quite earthy compared to some.
But still a wonderful matcha moment each morning.