The history of Matcha Tea dates back to the early 600’s in the Chinese Tang Dynasty. In this early stage of the tea’s existence, its leaves were normally steamed and then formed into tea bricks, which either went into storage or were used for trade. This is certainly a far cry from the extremely meticulous methods employed by modern day Matcha Tea distributors, but in its infancy, the wide range of uses and benefits for Matcha Tea were still widely unknown, compared to what we know about the brilliant leaf today.

In that era, the tea was prepared by first roasting and pulverizing the leaves, then decocting the resulting tea powder in hot water before adding a pinch of salt. If you have ever seen the way Matcha Tea is produced today, you will know that this ancient method of preparing Matcha Tea is exactly that -- ancient.

Beginning in the Song Dynasty which spanned from the year 960 - 1279, a new way of preparing the tea became more popular. Matcha Tea drinkers began producing a powdered tea from the steam dried leaves, not unlike you can buy today. The tea powder was then whipped together in a bowl with hot water much like modern preparation.

The Zen (Chan) Buddhists were the first to form a ritual of preparing and consuming the powdered tea, and eventually brought these rituals to Japan in 1191, where it is still very popular. Interestingly enough, powdered tea is no longer a popular form of tea in China, where the tea originally came from. Thankfully, the tea was an important item at Zen monasteries in Japan and became extremely popular among the upper classes of society between the 14th and 16th centuries.

If the Matcha Tea had not been so well received in Japan so many hundreds of years ago, we might not see Matcha Tea in our modern world today.

Ceremonial Use of Matcha Tea

Beginning as part of a religious practice, the use of Matcha Tea eventually evolved into a “transformative practice” with its own aesthetic, particularly the “sabis” and “wabis” principles. The “Wabi” represents the inner, spiritual experiences in every human’s life and was originally thought to bring on a quiet or sober refinement as well as a subtle taste that represents several human characteristics, both positive and negative.

Alternatively, “Sabi” is a metaphor for the outer or material parts of life, originally meaning “worn”, “weathered” or “decayed”. Understanding emptiness, especially among the noble was considered to be the best path to spiritual awakening all while embracing and accepting imperfection. Through the use of these tea ceremonies and remembering “sabis” and “wabis” the drinkers were better prepared on their path towards spiritual enlightenment.

By the 16th century, tea drinking was common practice for all societies in Japan and several historical figures created a philosophy around the tea ceremonies. Their philosophy was that each meeting should be treasured as it can never be reproduced again. This simple philosophy went a long way to creating many new forms of architecture and art, as well as the development of the “way of tea”. The principles taught be the “way of tea” - harmony (和wa), respect (敬 kei), purity (清 sei), and tranquility (寂 jaku) still remain as central elements of the tea ceremonies today.

Both locals and visitors to Japan are welcome to join in what is known as a “circle”, a group that meets regularly to participate in a specific activity, in this case, learning the various tea ceremonies. Many schools and universities also offer “tea clubs” for those looking to learn more about the ancient ways of the tea ceremonies.

The first thing new students learn may not have anything to do with the tea at all. Initial lessons can include everything from how to correctly open and close sliding doors, how to enter and exit the tea room and how to handle and wash the various tea equipment.

One the basics have been mastered, only then will students be instructed on how to actually prepare the powdered tea for drinking. Students will start out practicing the simplest temae (ceremony) and must learn to master it before moving on to any of the more complex ceremonies. The study is performed by way of observation and hands on practice with students usually prohibited from note taking.

As students progress and start to master more and more ceremonies, they are often awarded with certificates and given permission to move on to the next temae or ceremony. Students are expected to not only pay for their lessons and certificates, but it is also customary to thank the teacher by presenting them with a gift of money. Generally, the cost of acquiring certificates will increase as the student advances through the various levels of ceremonies, with the more advanced ceremonies costing the most.

With Japan’s bustling urban metropolis centers like Tokyo, many people are surprised that traditional beliefs and ceremonies are still regarded so highly. With the fast paced Japanese lifestyle though, taking the time to learn and understand the intricacies of the tea ceremonies can be a great way to slow down and really appreciate the values that hold the country together.

With many modern Japanese people still believing fully in the teachings behind the tea ceremonies, it is no wonder their culture has been preserved so beautifully, and will likely remain that way for many centuries to come.

I have purchased two more times, and now buying this tea for gifts.
Such a high quality product.

I am a big matcha fan and I absolutely love the matcha powder from Kento tea, very high quality, tastes great and reasonable priced. Will continue to purchase from them!

I have been drinking iced matcha lattes for a while now and was looking to start making my own to save money. The reviews on this item looked promising so I purchased it. Was initially shocked at the size of the package but it's actually worth the money once I consider the cost I was paying for a latte ($6-$7). The matcha is very fine and easy to blend up in my nutribullet and is very high quality. Very happy with the purchase and how quick it was delivered.

The matcha is so good, I love the ceremony tea and the Culinary grade too. 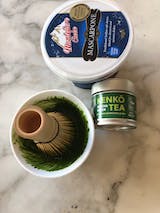 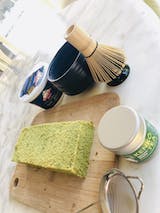 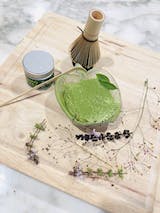 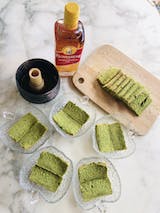 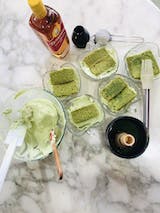